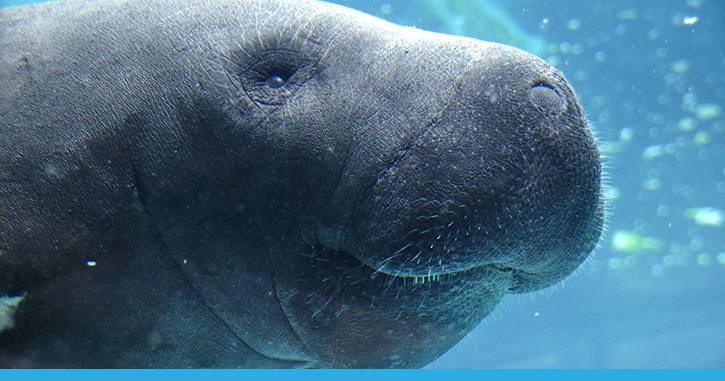 In this article, find out different facts all about the manatee. For example: what are manatees related to, what were they first mistaken for, and by whom?

First, what do manatees look like? Manatees (also known as sea cows) are grey, long, and beautiful creatures. Adult manatees have about 2,000 long whiskers (called vibrissae). That is a lot of whiskers! They also have flat, pancake-like tails that help them swim. Manatees can also live up to 40 years old! Manatees also have 3 or 4 nails on each flipper. Manatees are also near-sighted.

Did you know that manatees were once mistaken for mermaids? Crazy right? And the person who thought this was none other than Christopher Columbus. On January 9, 1493, he wrote, “They are not so beautiful as they are said to be, for their faces had some masculine traits.” Well, that is because they saw manatees – not mermaids!

How much do manatees weigh and what do they eat? Manatees can weigh up to 1,200 pounds! That might seem like a lot, but for a 10-foot long animal, it’s not that much. They can eat up to 150 pounds of food every day. Did you know that manatees are the only vegetarian marine mammals? Not only that, but they have the record for the largest marine herbivores. A manatee’s diet normally consists of lettuce or seaweed. Manatees normally use their flippers to help put the food in their mouths. It is super cute!

Manatees can swim up to 20 miles per hour. That’s pretty fast. Although they can swim 20 mph, it only comes in short “bursts” of energy. They can hold their breaths for 15-20 minutes before coming up for air at the surface! That’s a long time.

Can manatees have babies? Yes! Manatee babies are called “calves”. Manatees normally have one calf at a time, but sometimes they have twins. Twins are very rare though. The calves stay with their mothers for up to two years. They drink milk from their mother for about two years, and then they start to eat seaweed. When calves are ready to take their first breaths, the mothers will normally help by pushing them up to the surface! That’s so sweet!

Do manatees have any natural predators? No, manatees do not have any natural predators, but they do have humans as predators. Humans and boats are manatees’ main fears. Why you might wonder. Well, the motor on the boat can cut the manatees’ backs and hurt or even kill them. That is why when you are on a boat, you might spot signs that say, “Be Slow for Manatees.” Manatees also have to fear the red tide. This can be very, very dangerous for them.  If you didn’t know, red tide is a harmful Algal bloom that kills tons of marine animals every year.

3 thoughts on “Interesting Facts About Manatees!”